France was getting late for his meeting. As he hurriedly sat inside the car, his in-car assistant informed him about the traffic jam at his work route which would make him late for his scheduled meeting. Franc makes a quick decision to attend the meeting from home and then decides to travel. Later in the day, when he travels to work, his self-driving car takes a different route than usual, as it is still congested. While on his way to work his in-car assistant notifies him certain important things like- an upcoming client meeting, weather outside, traffic update, news etc. It also reminds him about his dinner plan at night and confirms the booking for 9:00 PM at a nearby restaurant.

Do you imagine a state like this where you are sitting in the backseat of the car and it is driving you to your destination, where you are least bothered about traffic, signals, bad roads, driver related issues etc. Yes, we are talking about the concept of “connected or autonomous or self-driving cars” that will be doing all of this and might be few more additional capabilities too. With the development of technologies like 5G, IOT, smart and connected things we will see these cars on the road by 2022.

As a technological enthusiast, I’m totally excited about the idea of a self-driving car, as many prototypes are being tested. The heavy lifters like Google, Apple, Uber etc. have been testing them in their backyard and there seems to be a stiff competition among the players, as who will be the first to launch it.

In 2017, NHTSA – a statistical projection of traffic accidents estimated that about 94% of serious crashes are caused due to human error, such as drunk or distracted driving etc. With autonomous cars these risk can be definitely be reduce thus making it more plausible for adoption by end users.

Most of the technology players are way ahead in testing these self-driving cars, though automobile industry was bit late but firms like Daimler, Chrylser and Volvo are also looking for ways like developing, collaborating or partnering to win the race of “self-driving” cars. One the other side, even countries are racing to be numero uno, The Netherlands is actually the one with the highest level of readiness for autonomous driving. The countries were rated on 26 variables within 4 pillars: policy & legislation, technology & innovation, infrastructure and consumer acceptance. The Netherlands ranked 1st in the ranking with a score of 27.73 providing an AV readiness model for other countries to follow with excellent infrastructure, a highly supportive government along with the enthusiastic adoption of electric vehicles.

Below are few facts from Autonomous Vehicle Index Report for Q1 2017: 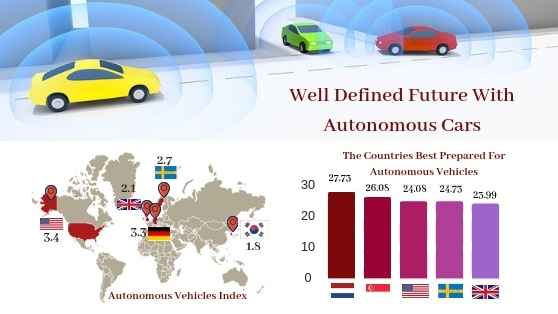 The technology for self-driving cars is not quite ready, as we do know few of the prototypes have failed leading to casualty. Once all these technical, legal, governmental and economics challenges are put in place, “autonomous vehicle” will radically change the phase of transportation industry in a big way. The potential benefits of driverless cars are appealing and widespread, and the future for the industry is bright. This could be the biggest thing to happen in the transportation industry.

To know more about the topic please click the link: Autonomous Vehicles