Vegan meat - also known as imitation, fake, simulated, meat analogue or vegetable protein - is a product that mimics the texture, taste or appearance of certain qualities of animal meat. They are made from a variety of ingredients such as soy, textured vegetable protein or wheat gluten. Vegan meat does not contain animal ingredients. 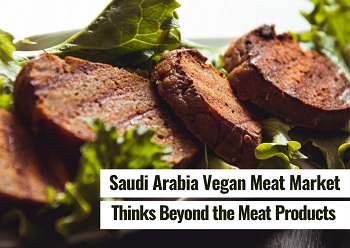 Saudi Arabia vegan meat market is expected to witness growth at a significant rate during the forecast period, 2023-2027. Factors such as the shift in preference of consumers towards healthier food alternatives and the trend of innovative food items are driving the market growth. Besides, the market players are making high-end investments to mass-produce vegan products that are high in iron, vitamin C and fibre to attract health-conscious customers into buying their vegan products.

Also, the emergence of online sales channels and the launch of a wide range of vegan meat-based products by the market players are expected to influence the market demand positively. Increase in obesity rates in the country and growing incidences of cardiovascular diseases, high blood pressure, asthma, and others are also contributing to the rapid adoption of vegan foods. Besides, a surge in vegan population and rise in health consciousness among consumers are supporting the market growth.

The Saudi Arabia vegan meat market is segmented into product type, type of sales, competitive landscape, and regional distribution. Based on the type of sales, the market is divided into institutional sales and retail sales. Retail sales are expected to account for a significant market share in the forecast period, 2023-2027. Due to ever-expanding consumer demands for vegan foods and a growing number of health-conscious people who favour vegan eating habits, it is predicted that retail sales will generate the majority of market income. Additionally, consumers who prefer home-cooked meals are contributing to the expansion of the retail sales sector.

To identify and analyse the Saudi Arabia vegan meat market, Bharatbook offers an exclusive market report from the Food and Beverages category. The study is useful in providing answers to several critical questions that are important for the industry stakeholders such as manufacturers, suppliers, end users, etc., besides allowing them in strategizing investments and capitalizing on market opportunities.